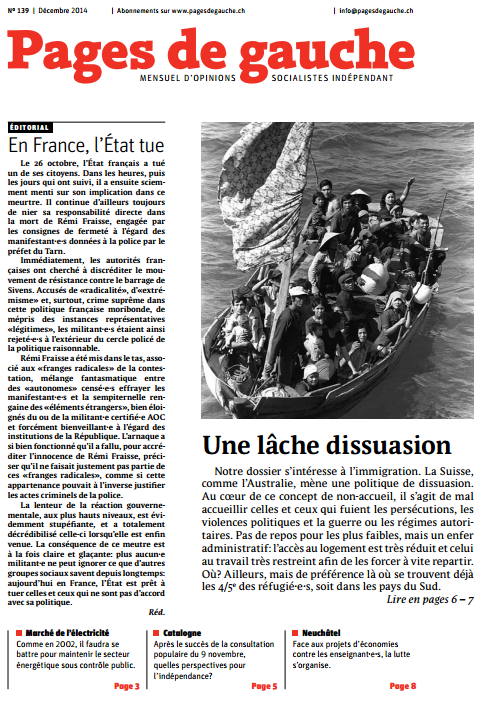 It is the Australian paradox that leaves most scratching their heads; how can a country whose wealth and prosperity has been built on the backs of the waves of immigrants starting with the British (who stole the land and brutally oppressed the indigenous peoples who had lived there for over 40,000 years), be so vehemently against the 10,000 or so refugees who turn up by boat annually? Reflecting on such a dilemma and examining the makeup of this nation one finds a very sinister element to the Australian subjectivity that stands in mark contradiction to the “fair go” and the “lucky country”; mantras carefully packaged for internal and external consumption.

The White Australia Policy still resonates in contemporary subjectivities. It was a policy birthed upon the Federation of Australia aiming to privilege the White British and empowered the Commonwealth to remove, forcibly in many cases, Chinese and Pacific Islanders from Australia. The policy stayed active up until 1973, abet in constant tension with Australia’s racist need to exclude the ‘other’ and the reality of needing immigration (white) to grow the capitalist economy.

Whilst the policy was dismantled, the Australian racist subjectivity remained. It was re-woken in the era of Pauline Hanson of the mid-1990s, a working class independent who won her Federal seat in regional Queensland based on her fascist rhetoric that Australia’s problems were directly because of the migrant ‘other’, which she believed was synonymous with dole bludger and all that was wrong in Australian society. Unsurprisingly so, Hanson bought back into consciousness a belief held by many, typified by the growth in support of her ‘One Nation Party’, which in some parts of Australia, held over 20% of her vote. With the timely fall of Hanson in the mid 2000s, the race was on for the Labor and Liberal parties to secure her votes. The stage set was exactly this; who could create the most horrific immigration policies for a purposely constructed opposition; the refugees desperate enough to cross the seas by boats?

The Howard government did not disappoint his newly corralled constituents, introducing policies that focused on the politics of deterrence, where the conditions refugees would be met with in Australia would be more terrifying than what they had escaped from. This included the opening of detention centres in impoverished Nauru and Christmas Island, mandatory detention for both adults and children arriving by boat, long processing times and temporary protection visas (even if refugee status is granted, it is only temporally and without family reunion). The Gillard/Rudd Labor government echoed such policies in their own regime. Now with the return of the current Liberal government headed by Prime Minster Tony Abbott and Immigration Minister Scott Morrison, the cruel situation has even gotten worse with the military actively engaging in turning back boats at sea. At the heart of the hegemonic discourse is the use of the term, “illegal refugees” – where those coming on boats are imagined as “queue jumpers”, despite such being in conflict with the internationally agreed definitions. Furthermore, the State operates with limited public scrutiny, protected by their self made veil of secrecy, justified by the argument “it isn’t in the National interest to disclose boat arrivals”. Somehow, many just trust the State that they are “saving lives at sea”, yet overlooking how many lives have been destroyed with the turning back of boats. In some cases those running from persecution have been directly given to their persecutors – as was the case of Tamils being handed over to Sri Lankan authorities just this year.

Overall, the regime is a far cry from the urgent need to frame forced migration within the global neoliberal economy. Forced migration is endemic to globalising neoliberal economic systems and directly reflects the structural inequality of the world we live in. When our world is molded by war, harsh borders, trade liberalisation and climate change, the instance of people being displaced is going to continually increase. Australia, like all industrial countries, has a hand in this. Today, more people migrate than any point in history, and this is increasing.

The Australian politics of deterrence underpinned by the racial subjectivity, misses the point that people will continue to seek refugee status, not only because it is their fundamental human right to do so, but more importantly because they rarely have any other choice.